The Yankees waited a long time to reap the fruits of their controversial 2012 trade for pitcher Michael Pineda, and when the strapping, 6’7” righty finally made his Yankee debut two years later after a raft of injuries, it looked like New York had itself a future ace in the making.

That is, until Pineda got caught with his hand – and neck – in the pine tar jar.

Pineda was 23 and coming off a solid rookie season in 2011 for the Mariners, one that included a selection to the All-Star game when the Yankees traded power-hitting catching prospect Jesus Montero for him in January 2012.

Despite Pineda’s upside, the deal enraged Yankee some fans who saw Montero as the second coming of Jorge Posada. It certainly didn’t help that Pineda seemed like damaged goods right off the bat. He went on the disabled list with tendinitis in spring training and then suffered a tear in his shoulder that kept him off a Major League mound all through the 2012 and 2013 seasons.

Making matters worse, Pineda’s maturity was called into question when he was charged with driving under the influence while rehabbing in Tampa.

But Pineda managed to silence the naysayers, at least temporarily, at the start of the 2014 season. Finally healthy and tabbed as the No. 5 starter, the hard-throwing Dominican Republic native made an impressive debut as a Yankee, dominating the Toronto Blue Jays through six strong innings in which he gave up one run on five hits and notched five strikeouts.

He followed that up a week later with an even better performance. In his Yankee Stadium coming-out against the hated Red Sox, Pineda gave up one run and struck out seven in six innings, picking up his first win in pinstripes and giving Yankee faithful reason to think the team may have gotten the better of that 2012 deal, after all. Montero, once considered a can’t-miss prospect, had so far been a bust for the Mariners.

Pineda’s first taste of Yankee victory, however, was bittersweet. TV cameras clearly showed a brown, shiny substance on his pitching hand that Boston announcers were quick to identify as pine tar, the sticky stuff hitters use to get a better grip on their bats but is forbidden to be used by pitchers because it can alter the flight of the ball.

The Red Sox, who could have easily brought the alleged cheating to the attention of the umps, remained surprisingly mum – cynical minds figured it was because two top Boston pitchers, Jon Lester and Clay Bucholz, were widely suspected of doctoring balls, too.

After the game, Pineda told reporters the brown stuff was nothing but dirt because his hands “get sweaty,” he explained. “I don’t use pine tar.”

Still, Major League officials quietly warned the Yankees to keep Pineda on the up-and-up, and the matter was dropped and the mystery remained unsolved.

Until Pineda’s next start, also against the Red Sox.

In the second inning, Boston manager John Farrell bounded out of the dugout to ask the umps to check Pineda. He had no choice: Hi-def cameras had once again detected a brown substance on Pineda – except this time the pitcher had slathered it on the side of his neck in a lame attempt to conceal the pine tar against his skin.

Considering it was a cool April night in Boston, a sheepish Pineda couldn’t blame sweaty hands this time for wanting to get a better grip on the baseball.

“It was cold, I couldn’t feel the ball in the first inning, I didn’t want to hit nobody,” Pineda offered. “I apologize to my teammates, and to everybody.

“I’ll learn from this mistake. It won’t happen again,” added the pitcher, who earned himself a 10-game suspension and special recognition in the Yankees’ Bad-Boy Hall of Shame for Dopiest Cheating Attempt Ever. 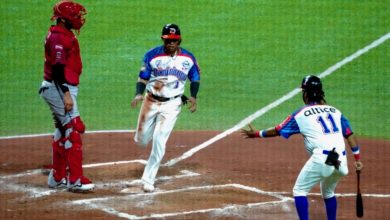 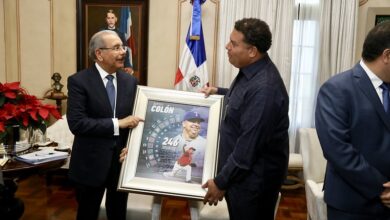 Dominican Day at the Ballpark 2018 kicks off with honors for Yankees’ Miguel Andujar, Dellin Betances 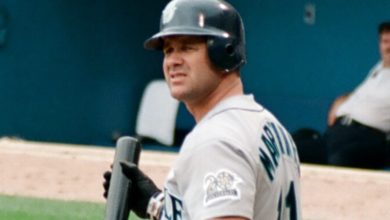 THIS DAY IN BÉISBOL May 18: Edgar Martinez hits 3 HR in a game the day after hitting two