When the Hall of Fame officially welcomed Ivan Rodriguez into its hallowed halls on July 27, it marked the induction of one of the best two-way catchers in baseball history.

Rodriguez, whose 21-year career spanned from 1991-2011 and overlapped such behind-the-plate immortals as Mike Piazza and Carlton Fisk, wasn’t just an excellent hitter. He was a defensive master feared for his lethal throwing arm — “Pudge” threw out nearly half of all base runners that foolishly tried to challenge him.

Despite the PED whispers that dogged him throughout the latter half of his career, Rodriguez’s first-ballot induction into the Hall — along with Tim Raines and Jeff Bagwell — is a testament to his all-time skills on both sides of the plate.

There are plenty of good reasons why the player affectionately known as “Pudge” is only the fourth Puerto Rico-born player to earn a plaque in Cooperstown, joining his boyhood idol Roberto Clemente, Orlando Cepeda and Roberto Alomar. Here are five of them, in no particular order:

He was an iron man behind the plate. Rodriguez is arguably the most durable catcher of all time. He’s the career leader in games caught, with 2,427 — Fisk, who played three more years, is second with 2,226. And in the five years from 1996-99 as a Texas Ranger, Rodriguez made more than 130 starts each season — many of them in the scorching heat of a Texas summer.

He collected an insane amount of hardware. If individual awards are a measure of a player’s career, Rodriguez earned enough to fill an entire wing in his house. He was the American League’s MVP for the Rangers in 1999 at age 27, when he made 141 starts at catcher, slugged a career-best 35 homers and 113 RBIs, and hit .332. He owns 13 Gold Gloves, the most for any catcher; won seven Silver Slugger awards, and was a 14-time All-Star. He also sports a World Series ring for leading the upstart Florida Marlins against the New York Yankees in 2003.

His right arm was a lethal weapon. Rodriguez led the majors nine times in caught-stealing percentage, including 2001, when he gunned down an unheard of 60.3% of base runners. He also had nine seasons when he threw out more than 50% of runners, and retired with a caught-stealing rate of 45.7%.

He was a pretty good hitter regardless of position. Rodriguez, who played for the Rangers (13 years), Tigers, Senators, Yankees, Astros and Marlins, finished his career with 311 HR, 1,332 RBI and a .296 average. He hit .300 or better in 10 seasons, and averaged 20 home runs a season.  As a catcher, his 298 home runs are tied for sixth place with Gary Carter (Piazza is the all-time leader with 396 HRs as a backstop).

His overall stats put him in rarified air. Rodriguez is among only seven players who have hit at least .290 with more than 2,500 hits, 550 doubles, 300 home runs and 1,300 RBI. You may have heard of the others: Babe Ruth, Hank Aaron, George Brett, Barry Bonds, Stan Musial, Todd Helton and the still-active Albert Pujols. 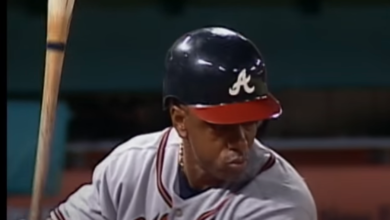 THIS DAY IN BÉISBOL May 19: Julio Franco blasts a pinch-hit HR – at age 45

THIS DAY IN BÉISBOL August 3: Albert Pujols becomes only player ever with at least 30 HR in first 4 seasons